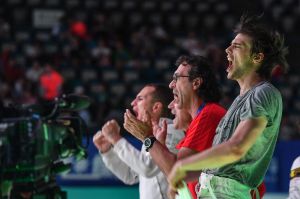 Well done everyone for staying in your bubbles and fighting this thing!

As a result Level 2 rules have now changed, and FeNZ has published new guidelines – see https://www.fencing.org.nz/news/170-fencing-in-covid-19-alert-level-2-update-29th-may-2020 for details.

While we have to continue being cautious, with the change to the size of gatherings allowed and Clubs opening up as a result, we’ve now also really happy to announce our new Fencing North calendar for the remainder of the year has been published. You can see this at: https://www.fencingnorth.com/calendar2/year.listevents/2020/05/31/-

It all kicks off in four weeks’ time on Saturday 27th June with our “Bubble Ensemble” tournament at Trusts Arena. This is designed to be a fun tournament to get everyone together to celebrate our super cool sport and is designed for everyone at all levels. All precautions will be taken regarding hygiene and social distancing, and numbers will be limited to ensure we keep within the 100-person limit at all times. I encourage everyone of all ages who can lift a weapon to enter if you can.

Secondary School Tournaments are then planned to start again at the beginning of Term 3 and run from the end of July and through August.

National Tournaments however are still on hold until the country reduces to Alert Level 1.
Hopefully this will be fairly soon, but until that happens you will see there are four weekends simply marked as “National Event TBA”.

Which tournaments end up being run will depend on when that move is made.

Here we go folks – you’ve got four weeks to prepare for battle – get into it!!!! 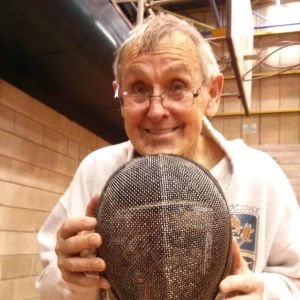 For those of you wishing to join us virtually for Rex's funeral tomorrow, here is the live stream link https://admin.oneroomstreaming.com/email/view/b1812b6419

It is with great sadness that Fencing North has to advise that last night Tuesday 19th May 2020, Rex Hefferen,  past President and long time stalwart of the Auckland Amateur Fencing Association (now Fencing North), passed away.❤️

Rex was without a doubt a good man and a good friend to Fencing and will be sadly missed.

Congrats - we are officially in Level 2, and I know there’s a lot of people been waiting patiently to find out when Fencing can restart.

As you may be aware from the News though, after the official guidelines were first put out last Friday by the Govt, there have had several amendments – particularly related to Sport.

As a result FeNZ has had to redraft our own guidelines several times, but these are now complete.

Please see the link below to the FeNZ website where they’ve just been published.

It is important that you read these thoroughly and make sure you work with your clubs to help them keep everyone safe.

Our intent is to restart local tournaments as soon as possible – hopefully in June – however its clearly impractical when your limited to ten people as per the current rules.

We will of course be revisiting these guidelines as the Govt reviews the Levels.

Watch this space for more details.

In the mean time – go forth and stab people – just do it carefully and kindly.

Confirmation of the Previous Minutes: David moved that the minutes for April be accepted as correct. Maja seconded. Motion carried.

Matters Arising: Katie noted that she had not posted any refereeing videos to the Fencing North Facebook page as promised.

Treasurer’s Report: Amanda gave the Treasurer’s Report. There have been no payments made or received since the previous meeting.
Amanda moved that her report be accepted. Maja seconded. Motion carried.

Fencing New Zealand has now cancelled both the South Island Champs and the President’s Cup. FIE has cancelled all tournaments in April, May and June, and postponed the Olympic Qualifiers.

The committee discussed whether we would be comfortable opening our clubs at Alert Level 2. Without knowing the updated guidelines, most agreed that it should be possible for clubs to start opening at Level 2. This would require appropriate rules for sanitising, equipment usage, distancing and contact tracing. It might be safer to allow clubs to open for footwork and drills only, since it is impossibly to guarantee physical distancing during a bout.  Clubs should only open if they are confident that they can comply with these requirements.

Competitions: Fencing North’s tournament organisers continue to monitor the situation together with Trusts to confirm which competition bookings we will be using in the following months.

The committee discussed whether we would be comfortable beginning to run tournaments at Level 2. In general, it was agreed that it might be possible but would need careful handling. Maja noted that she could use RegisterNow to require that all competition attendees (including spectators and volunteers) have a ticket, which would help with contact tracing and the size limit of gatherings at Level 2. However, younger fencers are required to have caregivers, which might cause difficulties with numbers.

David reported that the COVID19 committee has discussed each region having a big tournament to celebrate the end of restrictions. The aim would be to encourage as many people as possible to participate, for example by running a Sharks and Minnows tournament.

Katie suggested that it might be better to wait a few weeks after the Alert Level drops and clubs reopen to allow people enough time to feel comfortable and get back into condition.

Among the committee, some people would be comfortable attending a competition at Alert Level 2, while others would prefer to wait until Level 1. David promised to bring Fencing North’s views to the FeNZ COVID19 committee.

Fundraising: Rhys reported that the fundraising situation has changed dramatically: since many trusts do not currently have any income, they will be revising funding rounds. In general it will be very unlikely for us to succeed in applying for our big equipment and operations goals. He suggested that we apply for small grants around $1000-2000. Amanda suggested that he apply for funding for the coaching course that Judit is developing; David added the suggestion of funding first aid courses for coaches and volunteers.

Last month the committee agreed that the TTCF funding would go towards fabric pistes. However, it may be that the Auckland Council grants us funding for the same items. For now we agreed to wait until we heard back from the Council about our application.

Fencing New Zealand has announced that nominations for postponed international events will be re-opened with emended selection criteria.

Bryan (Baz) Clark has resigned at the head of the Officiating Commission. There is no candidate for the role as of yet. Fencing New Zealand and Fencing North would like to recognise Baz’s contributions to the commission.

Help for Clubs: Although neither Fencing New Zealand or Fencing North can offer monetary assistance, there is some help available for clubs (e.g. legal advice, HR services). David invited any clubs having problems to email him at This email address is being protected from spambots. You need JavaScript enabled to view it..

Privacy Enquiries: Following discussions in a previous meeting, Matt contacted the Privacy Commission with several key questions regarding Fencing New Zealand and Fencing North’s handling of fencer personal information. The key summary is that when we ask for personal information we have to make it clear what the information will be used for and who will have access to it. He recommended that the following information be added to statement that members will be required to agree to when they affiliate:

Amanda agreed to bring these to FeNZ.

Matt noted with regards to the latter point that this can be covered by an initial consent upon affiliation and does not need to be repeated for each competition. There is no difference in how minors’ personal information is treated.

Coaching Commission: Judit reported on the activities of the Coaching Commission. They have completed a registration standard for coaches in New Zealand, which will soon go out to the regions for distribution. This includes requirements for a police check and first aid certificate, although there will be leeway for coaches who cannot complete these during lockdown restrictions.

There are still plans to do four training courses, but these will probably have to wait until the end of Level 2. There is no need to complete all of the courses this year.

Well you have to admit it’s been a bit of an interesting start to the 2020 Fencing year!

The safety of all of our Fencing family is of course our biggest concern at Fencing North, so I hope you are all still buckled in and enjoying (as much as you can) a touch of self-isolation.

That said, I also hope that, like me, you’re itching to get back to cutting and thrusting as fast as you can!

Seemingly a long time ago (is it really only seven weeks?) Fencing New Zealand formed a Covid 19 sub-committee to manage the situation, and we made the decision to suspend all fencing activity just before the nationwide lockdown was imposed.

Now, like everybody else, we wait to see this week’s Government revelations on the new rules around Level 2, so we can figure out what the impact is going to be.

Our aim is to get clubs and tournaments rolling again as soon as possible, but only when the time is right and it’s safe to start. Check out https://fencing.org.nz/ for updates. In the background we’ve got plans in the works and are working with Trusts Stadium to be ready.

We’ve also been working with Judit Fliszar and FeNZ to begin running new Coaching Development Courses  – an exciting new initiative that we’ll be looking for coaches at all levels to join. All clubs will be invited to nominate coaches to attend in the near future.

While we “hurry up and wait” for the new announcements though, I encourage you all to stay in touch with your clubs and coaches and to start getting ready.

I would hope you’ve all been getting your fitness and flexibility levels up while in lockdown so you’re raring to go too. If not – there’s no better time to start than right now!

You’ve also probably got a bit of spare time to see what’s been going on in the world of Fencing at the FIE website www.fie.org and maybe get a few ideas on lockdown training at https://fie.org/articles/958, or maybe you could learn about the history of fencing, or watch some refereeing videos to keep your eye in."

I’ll be posting more info as it comes to hand, but in the meantime, stay safe, be kind, and  get into it!

Lastly – if you haven’t seen it already - here’s a little food for the soul. https://www.youtube.com/watch?v=Nw5KQMXDiM4