See the below announcement from FeNZ: 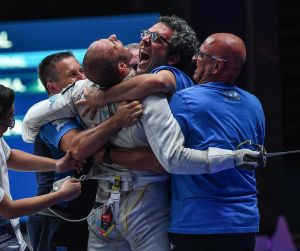 Fencing North is absolutely thrilled to announce the start of the FeNZ Coaching Development Course here in the North at 6.00pm this coming Monday (25th).

This first event is a general introduction to coaching presented via Zoom by North Harbour Sport’s Shaun Matthews and our own Judit Fliszar. You don’t even have to leave the comfort of your own home to attend and let’s face it – there’s not a lot of better things to do in a level 3 lockdown huh!

Are you ready to inspire, connect and empower others and create positive sporting experiences? Whether you’re just starting out coaching at school, at your club or within the community, Coach Emerge is designed to  help you learn about the coaching process, experience fun sport activities and learn new techniques that will provide you with the foundation to run your own coaching sessions.

This interactive evening is the first in a long term series of courses designed to develop our coaches to ultimately gain a qualification within the Oceania Fencing Masters Academy – the FIE recognized body for coach development in the Oceania Region.

Other sessions, including an important first aid course will be announced shortly.

This series is planned to be absolutely free and open to anyone who has already registered with the FeNZ Coaching Commission.

If you haven’t registered yet, it’s not too late.

This is an exciting time for our sport, so get into it and help us develop it to become even more amazing than it currently is.

Hi all, with the annoucement that Auckland will be at Level 3 until (at least) the 26th of August, the SS Sabre/Epee teams event next weekend has been POSTPONED. We fully intend to hold this competition later in the year, so watch this space - we'll make an annoucement about calendar changes as soon as the dust has settled.

Hope everyone is doing well in your bubbles - let's nip this thing in the bud so we can get back into it.

As you're all no doubt aware, as of midday today until 23:59 on Friday night, the Government has put Auckland back into Level 3 Covid Alert, and the rest of the country into Level 2.

To see what this means to you in Auckland see: https://covid19.govt.nz/covid-19/restrictions/alert-level-3/

Those of you outside Auckland should see: https://covid19.govt.nz/covid-19/restrictions/alert-level-2/

The net result of all of this so far as Fencing is concerned is that all training sessions for fencing clubs in Auckland during this period should be cancelled immediately, and, regrettably the President's Cup - scheduled to be held in Wellington this weekend - has also been POSTPONED.

We wait along with all of you to see how this unfolds, and will update this advice as soon as we know anything further.

(Note: The July meeting was held in ealy August due to an administrative error.)

Confirmation of the Previous Minutes: Katie moved that the minutes for June be accepted as correct. Rhys seconded. Motion carried.

Matters Arising: The two fabric pistes that were ordered have arrived in the country, but one of them was damaged in transit. We have paid for the undamaged one and requested a replacement for the damaged one.

Treasurer’s Report: Amanda gave the Treasurer’s Report. Fencing North is currently up c. $6500 for the year, but we still owe some money for the fabric pistes and hall hire. Amanda thanked the competition organisers for doing such a good job of increasing the turnout at competitions so we can continue to break even or make a profit.
We still do not have payment details from Oliver for our website fees. We need to transfer the website hosting costs to Fencing North.
Amanda moved that her report be accepted. Sunnie seconded. Motion carried.

SS Individuals and Foil Teams: Maja reported that the competitions were very successful. She is working on a report for the executive and will send Katie the details of team entries for invoicing.

Larsen Open: The Larsen Open will be held in Hamilton on the 8th of August. Nicole Martin is coming up from Wellington to DT the tournament. We plan to run this tournament in Whangarei next year and continue moving it around the region. Maja noted that next time it would be better to create clear expectations for who is doing what, as currently it is a bit confusing.

SS Sabre/Epee Teams: This tournament is coming up on the 23rd of August. This time Maja will use a late fee to encourage people to enter teams earlier, as in the previous competition there were entries coming in the night before.

North Opens: This is currently scheduled for the 18th of October, but this is only a week before the weekend of National Opens. Maja suggested moving the competition earlier in October, or later to the start of December. The committee agreed in principle that the tournament should be moved; the tournament team will work out the details and communicate this with Fencing North members.

Oceanic/National U20s: The Oceanic Fencing Commission has decided that Oceanic U20s will not be held this year, as there is no guarantee that the borders will be open. FeNZ has also decided that the end of this year is too busy to hold the NZ U20s competitions, so the competition may be moved to early next year. Fencers who qualified for the tournament in 2020 would be permitted to enter this event. Katie will communicate with our members about these changes.

Regional Teams at NZSS: Fencing North has again been invited to select and send teams to the NZ Secondary Schools championship. Following resolutions from previous years (see the minutes from August 2018 and July 2019), we initially invited schools only to nominate teams. However, many club representatives wished to change the policy so that composite teams (from more than one school) would be allowed.
Following discussion, Katie proposed the following: That Fencing North will allow nominations of both school and composite teams. Students will be expected to join a school team if that is possible, and may form a composite team only if they cannot create a school team. If selection is required, the A teams of each school will be preferred in the selection. If there are more team slots available, then composite teams and any additional school teams may be selected to fill them.
Maja seconded. Motion carried.
More information about our team selection policy is available here.

Referee Development at NZSS: The committee went over a proposal from David to send development referees to the NZSS competition. This is a valuable opportunity, as it gives referees the chance to become ‘qualified’ as national level referees, which is beneficial for running national competitions in the North region. However, Amanda was concerned about going over budget by sending too many referees.
Rhys proposed that Fencing North send three referees for development, and take advice from our senior referees (Anya, Neil and Laura) about who those should be. Amanda seconded. Motion carried.

Health and Safety: This month there were no reported incidents at Fencing North competitions. Maja noted that we still do not have a health and safety officer. For now, Maja is keeping any incident forms that are filled out.

Fundraising: Rhys reported that he has put through and application to the Albert-Eden board for money to run a first aid course, and that he has prepared applications for aluminium pistes (to Four Winds) and the coaching course (to the Lion Foundation). He needs new quotes to complete these applications.

FeNZ News: Amanda reported the news from Fencing New Zealand. FeNZ has received some money from Sport NZ and the FIE, which will go towards covering operating costs such as insurance and website fees. There may be some additional funding available to the regions. FeNZ will also receive the regular equipment grant from the FIE, which will go towards a top end scoring box and new reels.
Although the national body has received money from Sport NZ, we are still not officially partnered with them, so there is no money available to clubs through them currently.
FeNZ is still looking for nominations for the Officiating Commission and a Health and Safety Officer.

Officers: Maja suggested that Fencing North should look for a Welfare Officer: the first point of contact for anyone who is in distress, with a protocol to follow when members have personal issues.
Katie suggested that she might put a ‘Volunteers Wanted’ page on the website.

The entry form for the Fencing North Secondary School Sabre and Epee teams competition is now live! Get your teams in HERE.

By entering you agree to our entry agreement HERE.